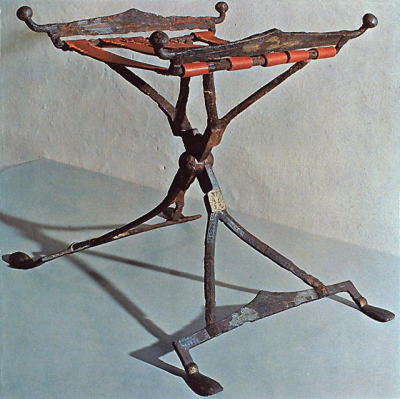 Restored works of art are numerous and are found mainly in Lombardy, almost impossible to enumerate them: from the statues on the spiers of the Milan Cathedral, damaged by the allied bombings of the Second World War, to those of the gardens of the Villa Reale in Milan (as in the photo below).

The knowledge of materials and processing techniques, combined with a rare ability to execute, made of Giuseppe Carlo Bobbi a precious resource also for archaeologists.

Numerous and important were the archaeological finds that curators, superintendents and directors of museums have entrusted years to his care.

Among these perhaps the most celebrated in the mid-twentieth century was the Roman throne of Pavia, exposed to light at the old bridge following the reconstruction of the bridge after the bombing of the second war, and now exhibited at the archaeological museum of Pavia.

The exhibit, a saddle plicatilis, ie a folding chair revealed Carolingian or Ottonian art, is a rare example for the technical complexity and refined decoration, and the two seventh-century “plutei” depicting the tree of life between winged dragons and a chalice flanked by peacocks, recognized as presbyterial furnishings of the church of S. Maria Teodote, which well document the artistic rebirth at the time of the Lombard king Liutprando (711-774 AD).  (the description of the find is taken from the site of the Archaeological Museum of Pavia – Sala Longobarda)