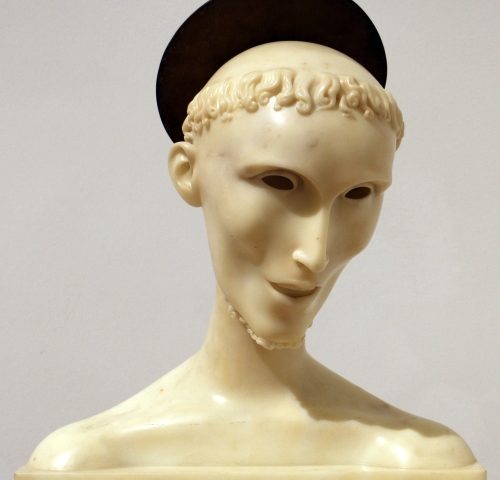 Giuseppe Carlo Bobbi was gifted with a deep knowledge and unusual ability about how to work with marble.    He knew how to sculpt and smooth marble to make it bright and soft at the main time, like a precious object of porcelain.    At the end of WW1. he arrived in Milan with his family and found work in the laboratory of Adolfo Wildt.

Thanks to his talent he became the “alter ego” of Wildt, who was himself an esteemed artist and finisher of many of the works created by this brilliant artist in the post-WW1 period, look at the page dedicated to the collection of sketches of the artworks of Adolfo Wildt.

Besides the daily activity in the laboratory during the period 1920 – 1934, Giuseppe Carlo Bobbi took part in new initiatives like the “School of the Marble” opened in Milan by Wildt, and with collaboration from the “Accademia di Brera”.

It was during this period that Giuseppe Carlo Bobbi became such an appreciated sculptor, highly esteemed by the Supervisors and Directors of the Accademia and also by even more well known artists throughout Italy.

These included Carlo Bonomi, Giannino Castiglioni, Giacomo Manzù, Francesco Messina, Carlo Sessa and many more.    After the death of Wildt and the closing of his laboratory, Giuseppe Carlo Bobbi continued to collaborate with many of them.

Giuseppe Carlo Bobbi did not limit his artistic sphere to sculpture in marble in which he excelled, but always sought to express his capacity of interpretation through different materials, ranging from wood to cement.

During his life, Giuseppe Carlo Bobbi was also a leader as well as teacher for his son, Orazio Bobbi, who was to become an appreciated contemporary sculptor in Milan.

the manifestations of condolence at his death